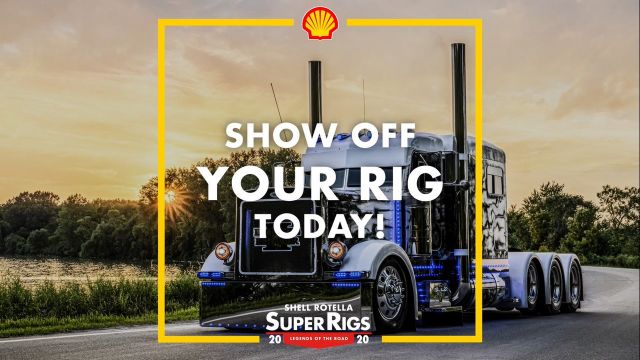 The 38th Annual Shell Rotella® SuperRigs,® which has gone virtual this year, is now open for entries through August 21 on the SuperRigs page at MyMilesMatter. This is an opportunity for hard working truck drivers from across North America to enter and showcase their trucks.

Many of the traditional Shell Rotella SuperRigs categories will be featured and entries will be judged by experienced industry professionals who work for major trucking publications or broadcast companies. Judging will take place August 24 through September 4 and award winners will be announced daily September 14-18 during National Truck Driver Appreciation Week.

2020 Shell Rotella SuperRigs will feature many of the traditional categories:

There will also be two special recognition categories with one award for each:
·         Most Hardworking Trucker - Contestants interested in competing for the award may enter during the online registration process and tell their personal story of how they worked hard over the past year. SuperRigs judges will select the winner.
People’s Choice - Contestants and spectators can register their vote for the award at MyMilesMatter. Everyone is encouraged to browse all of the entries on the website to find the truck they like the best and then cast their vote. Voting for People’s Choice will take place August 24-September 4 and you may vote one time per day, per email address. Visit MyMilesMatter for voting and eligibility requirements.

California, MO…. Get ready for the very first Crossroads Truck Meet to be held on April 17th at the Crossroads Shoppin...