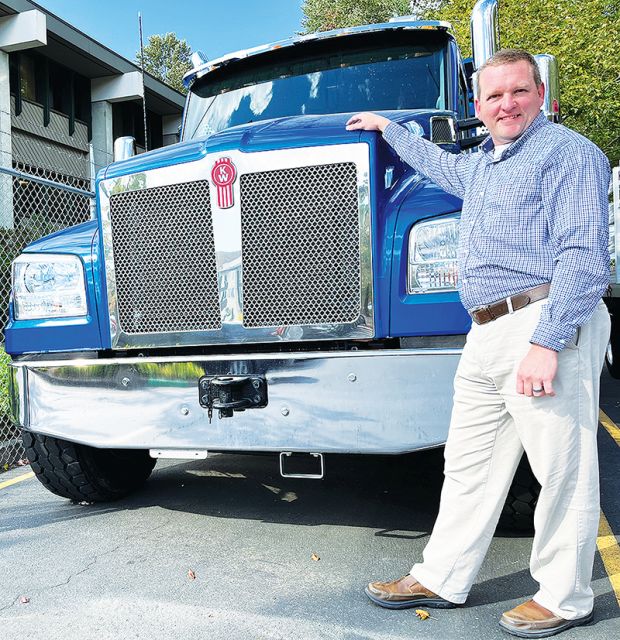 JOINT BASE LEWIS-MCCHORD, WA…  A career development, networking, and job hiring event at a Hiring Our Heroes Summit was held recently at Joint Base Lewis-McChord (JBLM) in Washington state.

At the summit, Kenworth representatives met with members of the military to discuss employment opportunities with Kenworth and to provide information about the trucking industry. On display at the event was a Kenworth W990 equipped with 52-inch flat roof sleeper, PACCAR MX-13 engine and a PACCAR TX-18 automated transmission for event attendees to get an up-close look and learn about Kenworth’s latest long hood.

According to Mark Buckner, Kenworth section manager for battery electric vehicle development and member of the U.S. Navy reserves, interest in meeting with top national and Washington state employers was high at the career summit. “There was a line that wrapped around one of the cargo plane hangars, which is a very large building,” said Buckner. “A number of attendees stopped by the Kenworth booth and showed interest in learning about the company and our open positions. There was also a lot of interest in the W990 we had staged at the event. I think it was fun for people to compare a modern Class 8 commercial truck with equipment that’s used in the military – it’s very different. We received a lot of compliments about the styling of the truck and in-cab technology, such as the new 15-inch digital display.”

Buckner was one of several Kenworth employees on hand to discuss employment opportunities and provide information about Kenworth to event attendees. Prior to joining Kenworth in 2018, Buckner spent seven years in active duty with the U.S. Navy as a submariner. His most recent deployment was to Afghanistan in 2017. Buckner has also served a combined 12 years in the U.S. Navy reserves and currently ranks as captain. With Kenworth, Buckner supervises a team of design engineers for hoods and bumpers of Kenworth’s Class 8 trucks.

At the career summit, Buckner met with several qualified candidates for open engineering positions within Kenworth. The company was taking applications ranging from open positions at the Kenworth Renton manufacturing plant, to engineering, HR, and marketing opportunities at company headquarters in Kirkland, Wash. Across Kenworth’s manufacturing plants in Renton and Chillicothe, Ohio and its headquarters, Kenworth employs more than 150 veterans.

“It’s important to have career events for veterans transitioning from active duty to civilian life. They’re especially helpful for those that don’t quite know what they want to do post-military life,” said Buckner. “Working with Kenworth, I get to help design components for trucks that I see on the road every day and that help keep the economy moving. I think that’s pretty cool. It’s been a great experience working for Kenworth.”

In addition to supporting veteran career events, Kenworth is a leading sponsor for the “Transition Trucking: Driving For Excellence” program. The program is dedicated to finding America’s top rookie military veteran driver who have made the successful transition from active duty to driving for a commercial fleet. Kenworth will provide the top award for the seventh consecutive year – a Kenworth T680 Next Gen equipped with a 76-inch sleeper and the complete PACCAR Powertrain featuring the PACCAR MX-13 engine, PACCAR TX-12 automated transmission, and PACCAR DX-40 tandem rear axles.

There are currently 11 driver finalists up for the award. The final winner will be announced in December in Washington, D.C.