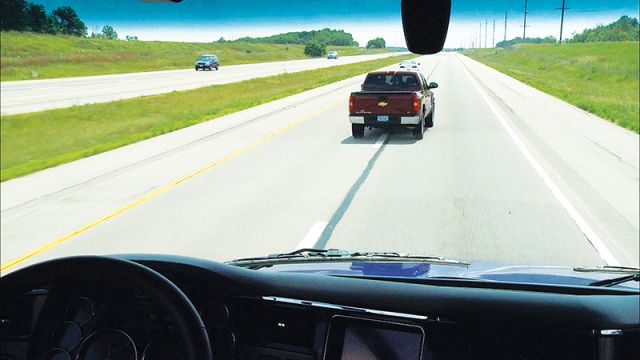 FMCSA’s rule change, effective May 6, 2022, amends the Federal Motor Carrier Safety Regulations (FMCSRs) to allow certain vehicle safety technology devices to be mounted slightly lower on the interior of commercial motor vehicle (CMV) windshields than was previously permitted. The rule had required devices to be mounted not more than 4 inches below the upper edge of the area swept by the windshield wipers. FMCSA modified the rule to increase that distance to 8.5 inches. The change makes permanent a temporary exemption the agency granted previously.

In addition, units must be mounted not more than 7 inches above the lower edge of the area swept by the wipers. Devices are still required to remain outside the driver’s sight lines to the road, highway signs, and signals. And devices such as antennas or transponders that are mounted at the top of a windshield must be located outside the area swept by the windshield wipers. The amended rule also revises the definition of “vehicle safety technology” to add technologies that had been granted temporary exemptions previously.

As a result of the amended rule, the video cameras for the Bendix® Wingman® Fusion™ collision mitigation technology, AutoVue® Lane Departure Warning (LDW) System by Bendix CVS, and SafetyDirect® by Bendix CVS will remain compliant. They had already been allowed as part of the temporary exemption.

“This ruling marks another important step in the continuation of the commercial vehicle industry’s highway safety efforts,” said Fred Andersky, Bendix director – government & industry affairs. “The amendment will make it easier to implement advanced technologies that use multiple sensors – likeWingman® Fusion™ – without fleets, drivers, and truck manufacturers having to worry about violating windshield clearance rules. It updates the regulation in favor of technology – not only for driver assistance systems but also for more automated driving systems that take advantage of additional sensors.”

Andersky added, “We must also keep top of mind that drivers are – and will remain – critically important, and maintaining their ability to see the road is essential. The ruling effectively balances the needs of both drivers and the technologies designed to assist them.”

In its decision, the FMCSA noted it “believes that the rule has the potential to improve the safety of CMV operations. The Agency also finds that CMVs outfitted with vehicle safety technologies under current exemptions do not present an increased safety risk compared to other CMVs.”

The Wingman Fusion active safety system and AutoVue® LDW are effective in most weather conditions where lane markings are visible. The systems’ forward-facing cameras, therefore, need to be mounted within the swept area of the windshield wipers.

The driver-facing camera covered by the ruling is part of the powerful fifth generation of the SafetyDirect processor platform, which Bendix launched in 2019. SafetyDirect is the user-friendly web portal that provides fleet operators with comprehensive feedback on their fleet and drivers, along with videos of severe events. The system wirelessly transmits real-time data and event-based information from a vehicle’s J1939 network to the fleet’s back office for analysis.

Bendix launched the first generation of its powerful Wingman Fusion family of technologies in 2015, integrating radar, camera, and a vehicle’s brake system to create its flagship driver assistance system.

By combining the camera data with input from radar and the vehicle’s brake sensors, Wingman Fusion creates a highly detailed and accurate data picture of a vehicle’s situation and surroundings. The comprehensive system includes adaptive cruise control, lane departure warning, collision mitigation, and overspeed alert and action – all while prioritizing alerts to help reduce driver distraction.And because it is built on the Bendix® ESP® Electronic Stability Program full-stability system, Bendix®Wingman® Fusion™ also helps drivers potentially mitigate or reduce the severity of additional crash situations, including rollovers and loss-of-control incidents.

Since the launch of Wingman Fusion, Bendix has regularly expanded and improved the system’s capabilities through advancements such as multi-lane autonomous braking (AEB); highway departure warning and braking; and active steering features including lane-keep assist as well as torque overlay, which enables drivers to use less effort to steer the vehicle at low speeds.

Bendix® AutoVue® LDW is a vision-based system linking its 60-degree field of view camera to an on-board electronic control unit (ECU) that uses image recognition software to track visible lane markings. This latest 4G-version LDW system continually monitors a vehicle’s position and detects when the vehicle begins to drift toward an unintended lane change. Upon detection, AutoVue emits a distinctive “rumble strip” or other audible warning to alert the driver to make a correction.