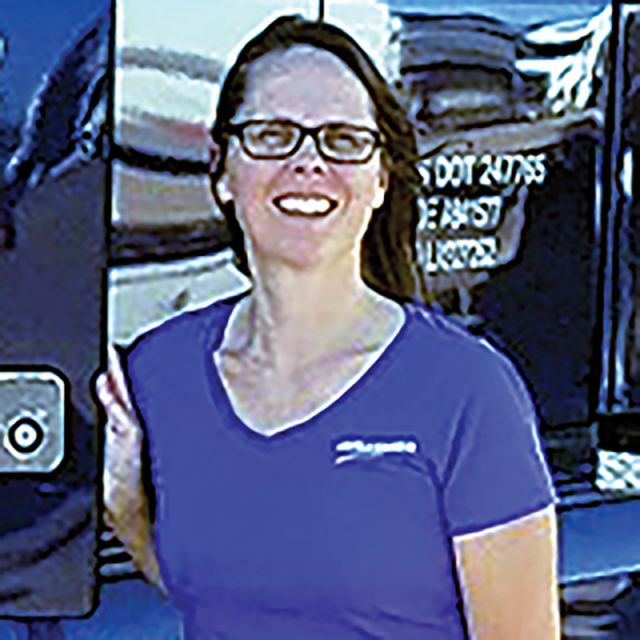 The Truckload Carriers Association has named Donna Wright, from Kelowna, British Columbia, a Highway Angel for stopping at the scene of an accident and rushing to dispatch first responders.

Wright has been team driving with her husband, Geoffrey, for four years. On June 6 around 5:30 a.m., she was behind the wheel as Geoffrey slept in the sleeper berth. They were eastbound from Vancouver and headed to Ontario on the Trans-Canada Highway. “It was just starting to get light out as we approached Salmon Arm (British Columbia),” Wright shared with TCA. “I noticed there was a lot of mud strewn across the highway.” Looking farther ahead, she was alarmed to see a semi–truck 20 feet off the side of the road in a marshy area with the tractor on its side. The driver had just missed a concrete barrier. Wright put her hazards on and pulled over and then grabbed her headset as she jumped out of the cab. “My heart was racing,” she recalled. “I knew in my heart of hearts that I needed to do what I could, but I don’t deal well with tragedy or blood.” In fact, she can become faint in a moment. “The best thing I could do was to call 911 and get them dispatched.” While Wright knew she couldn’t get too close, she called out to the driver to see if he was okay and if there was anyone else in the cab. About that time a driver in a pickup truck pulled over to the side of the road. As he ran down into the marsh, the truck driver emerged and was able to pull himself out of the truck. “He was coherent and was able to answer questions and didn’t appear to have any serious injuries,” said Wright. Police and an ambulance arrived minutes later.

Wright said Geoffrey slept through all of it. “I did wake him up afterward,” she said with a laugh. “He was actually quite taken aback that I would do that because of my fear of blood—a little scratch on my finger and I pass out.” she quipped. “He was quite pleased with me. I’m glad I could do that for a fellow driver. I would hope someone would do that for me if something were to happen.”

HASTINGS, NE…  The Love’s Family of Companies, Cargill and their affiliates have entered into a unique 50/50 join...