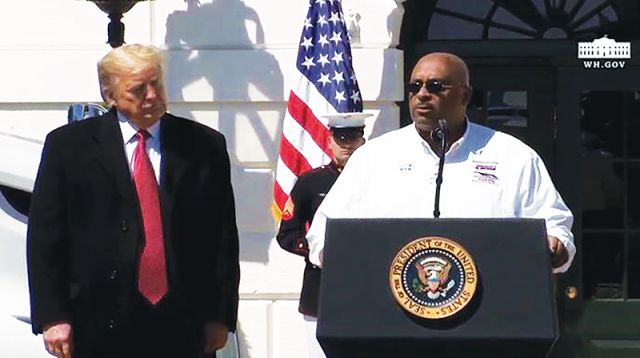 America's Road Team Captain Stephen Richardson, a 19-year driver for Big G Express, Inc., was honored Thursday, April 16 at the White House by President Donald Trump along with other commercial truck drivers and the industry as a whole. Richardson, who called the occasion “the experience of a lifetime he will never forget,” hailed his fellow truck drivers for keeping the supply chain connected and essential workers supplied.

“Just being on the White House lawn and seeing the trucks….and getting the honor and respect that I think the 3.5 million truck drivers deserve, it was just heartwarming. It’s not personally me, it’s all of us out there doing our jobs,” Richardson said.  “The mechanics, the technicians, and the people who keep us running, they need to also be recognized.”

President Trump expressed deep thanks to truck drivers on behalf of the country saying, “At a time of widespread shutdowns, truck drivers form the lifeblood of our economy …They’re always there.  In the war against the virus, American truckers are the foot soldiers who are really carrying us to victory.  And they are.  They’ve done an incredible job… and we want to thank you very much.”

Richardson has served as a Tennessee Trucking Association Road Team Captain and an American Trucking Associations Road Team Captain. To achieve this distinction, he was judged on his ability to express his knowledge of the industry, his skills in effective communication about safety and transportation, and his overall safe-driving record. In his 30-year driving career, he has over three million accident-free miles.

During his remarks at the ceremony, Richardson noted his pride at being a part of Big G, a 100% ESOP (employee-owned) company. “We own the company,” he said. “That makes me very proud to know I’m part of this organization.” To this, President Trump remarked, “You’re rich!”

FENELTON, PA.... Clearfield Customs, located just off Route 422, a few miles East of Butler, Pennsylvania in the town of...