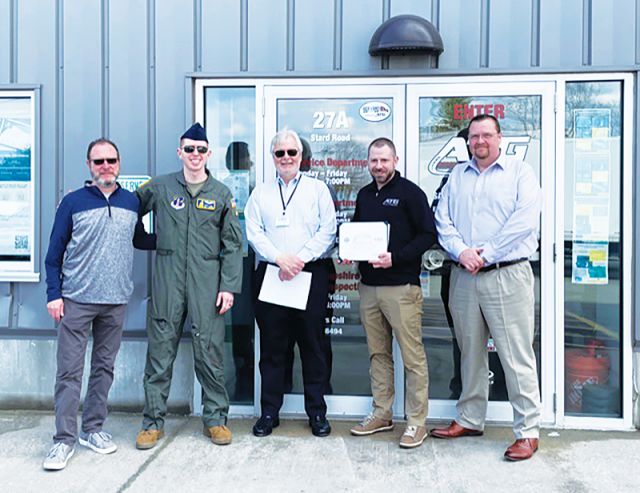 Advantage Truck Group parts director Michael Ramian received the Employer Support for the Guard and Reserve Patriot Award during a ceremony on Friday, March 18, 2022 at the company’s dealership in Seabrook, New Hampshire. Administered by the U.S. Department of Defense, the award recognizes supervisors for their outstanding support of employees in the National Guard or Reserve.

Keith Reid, parts department team leader at ATG Seabrook, nominated Ramian for the award. Reid, who is also a member of the Air National Guard, praised Ramian for supporting him during his training to work as an in-flight refueler and while called to service as part of New Hampshire’s COVID-19 response.

“Both of my brothers are in the National Guard and serving has always been something I’ve wanted to do,” said Reid. "I was concerned about how I would be able to maintain full-time employment and serve my country, especially if I needed to fly overnight. Mike went above and beyond to support me, giving me the time-off I needed without question.”

In 2021, Reid was called to active service to support the state’s vaccination site in Dover and this year has been assigned to work at Frisbie Memorial Hospital in Rochester to assist New Hampshire’s healthcare workers.

“I contacted Mike each time I was called to serve and each time he whole-heartedly supported my commitment. The support he gave me really sets him apart from any supervisor or manager I’ve ever worked for before. This award gives him the recognition he deserves as a leader,” said Reid.

“I’m honored and humbled to receive the Patriot Award,” said Ramian. “I believe it’s my duty to support all those who serve our country in the Guard and Reserve. Keith is a valued member of my team and I want to thank him for his service.”