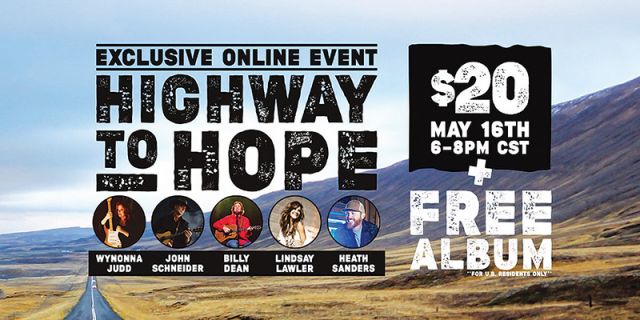 The St. Christopher Truckers Relief Fund (SCF) is pleased to announce that country music singer Wynonna Judd will headline the organization’s first ever virtual benefit concert “Highway to Hope” on Sunday, May 16, from 6 – 8 pm CST. Judd will be joined by other country music artists who have been supportive of the trucking industry in the past, including John Schneider, Billy Dean, Lindsay Lawler and Heath Sanders. The event will be hosted by a familiar face, or should we say voice, in the trucking industry. Radio Nemo host Jimmy Mac.

Tickets for the livestream event are available for $20 (plus a $2 transaction fee) on the SCF website at livestream.truckersfund.org, which will also be the site for the livestream. A portion of proceeds from the concert will go directly to the SCF to support truck drivers in need. Individual ticket purchasers in the US will receive a free CD from the NASTC Grand O Trucking Show which includes Lindsay Lawler and Nashville singer/songwriters featuring music celebrating the trucking industry. Donations can be made during the live event.

The St. Christopher Truckers Development and Relief Fund (SCF) is a 501(c)(3), truck driver charity that helps over-the-road / regional semi-truck drivers and their families when an illness or injury, occurring within the last year, has caused them to be out of work. More than 70% of the 3.5 million professional truck drivers in the U.S. have one or more serious health problems such as obesity, diabetes, sleep disorders and cardiovascular disease. These essential workers spend long durations away from home, work irregular hours and are often unable to get to a clinic, pharmacy or hospital. Minor illnesses become severe, leading to hospitalization and disability. Loss of their commercial driver’s license can result in them being unable to work, and financial hardship.

“The first ever Highway to Hope benefit concert will be a fun virtual event bringing our industry together, at a time when we are far apart, to raise support for SCF and our highway heroes with amazing artists that want to give back to this industry. We hope you will join us for a night of music and celebration,” says Shannon Currier, Director of Philanthropy and Development with St. Christopher Truckers Relief Fund.

Wynonna Judd is an American country music singer with multiple Billboard Music Awards to her name. She got her start in the music business in the 1980s alongside her mother, Naomi, as part of the country music duo The Judds. Her latest EP, Recollections, came out in October of last year. Judd was honored in 2007 with a star on the Music City Walk of Fame in Nashville.

Actor and musician John Schneider, known for his role as Bo Duke on “Dukes of Hazard” television show in the 1980s, recently released an album titled “Truck On” saluting the American truck driver. Proceeds from the album and single track of the same name will also benefit the SCF. Schneider has enjoyed a successful career in country music, topping the charts with his no. 1 hits I’ve Been Around Enough to Know and You’re the Last Thing I Needed Tonight.

Billy Dean was born in the small town of Quincy, Florida, and started his music career at the age of eight, singing with his father’s band, the Country Rocks. After touring the Gulf Coast circuit in his late teens and early twenties, Billy’s first big break came in 1988 when he won Best Male Vocalist on Star Search, hosted by Ed McMahon. His success on the show led to signing with Capitol Records and the release of his debut album Young Man in 1990. Buoyed by the singles “Only Here for a Little While” and “Somewhere in My Broken Heart,” Young Man became Billy’s first of many Gold records.

“A Red River Girl,” Lindsay Lawler was born in Oklahoma and raised in Texas. A longtime radio producer and host hailing from her years working with legendary Kidd Kraddick, Lawler moved to Los Angeles in the early 2000’s to continue on-air radio work, as well as performed the Sunset Strip and toured with her rock band. She has spent the past 14 years as a singer/songwriter in Nashville and top performer downtown on Broadway. She formed a partnership in 2011 with the Truckload Carriers Association and toured as the National Spokesperson for the Highway Angel program, performing free concerts for truck drivers across the country. Lawler has performed multiple years at the Capitol in DC for the lighting of the Christmas Tree, as well as the laying of the wreaths at Arlington Cemetery. Lindsay Lawler continues to perform at her private music venue in downtown Nashville, as well as for countless TV/film projects. She is a podcast host, mentor to many young Nashville artists, and runs her own publishing company as well as music event company. She is currently in the studio working on her next album to be released this summer. Lawler is a long-time friend and supporter of the trucking industry and proud to be promoting the St. Christopher Fund’s amazing efforts.

Heath Sanders is an Arkansas natural gas-worker-turned-songwriter whose realness informs the music he crafts. It all started after he posted on Facebook his cover of Chris Stapleton’s “Either Way” in early 2018. The video filmed in his living room would quickly transform his life as millions watched and reshared, making Heath an overnight viral sensation among the working class communities in the Midwest and Rust Belt. Drawing upon a lifetime of early mornings and long days, Heath emerges as the new voice of folks who identify with hard work and have the sore backs and tired feet to show for it. His debut single “Old School’s In” is part of a four-song collection called COMMON GROUND, available now via The Valory Music Co.