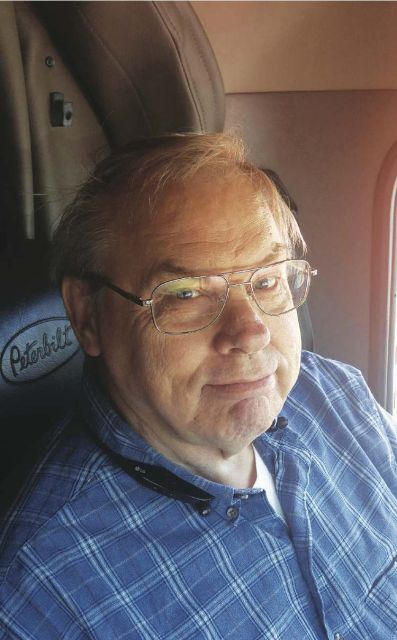 “What the hell was I thinking!”, I said to myself as wind driven snow pelted the windshield. It was the middle of January, and middle of the night, in the middle of Minnesota. My load was a big green machine, chained to the stepdeck, destined for a dealer in North Dakota.

Despite the date, time, and location, dispatch said it was hot. Could I deliver it first thing in the morning? Sure, I said, not bothering to check the forecast. Now still a hundred miles from Fargo, blowing snow was clogging the wipers and smearing the windshield. And it was cold. Frigid cold. How cold, you ask? I’ll just tell you this. That’s the night my lawyer had both hands in his own pockets!

I couldn’t say no to a dispatcher. Well, okay, I could say no, but rarely have. Why? Well, first because I’m an idiot, and second, because I’ve always been afraid of disappointing them. And of course, it’s the one thought that matters the least. So as images of crashing, jack-knifing, and testifying on the witness stand crossed my mind, I was forced by the wind to focus on the rapidly disappearing pavement.

“I’ll never do this again!”, I said out loud, just as I have a hundred times before. But wait—what? What was that? Did I just pass a car stopped on the shoulder? Did I see an arm sticking straight out the window? Is my imagination running away with me? Probably is, I thought wryly, but I’d have to stop and make sure.

Coming to a shuddering stop just right of the rumble strips, I got out and trudged back to where the car was. Sure enough, just as I’d feared, a bare white arm was sticking out the driver’s window. Attached to that arm was a 38-year-old female, passed out behind the wheel, a half can of beer was still clutched in her other hand.

Now more angry than afraid, I thought about just leaving her there, because it was, after all, entirely her fault. But God didn’t abandon me, in that moment, so I decided not to leave her. Slogging back to my truck, through fast-growing snowdrifts, I climbed back in and reached for the CB. Mumbling a short prayer, mostly for myself, I keyed the mic and put out a call for help.

“Breaker, one-nine”, I said with more confidence than I had, “looking for a base station near mile marker six-oh!” But there was no response. Knowing I’d have to go back and check on her, I tried one more time. That’s when I heard, “Hey, Bud, I got your break. What’s up?”

As quickly as that, the windswept prairie appeared a lot less threatening, and shortly after that call, the darkness was shattered by countless flashing red lights. The cavalry had arrived, and I would not have been more surprised—or relieved—if it had been the Three Kings from the Nativity scene! For my part, I was just glad to have the company!

The moral of the story is, of course, to be prepared. Keep the chains tight, lights on, cab warm, and a change of dry clothes. Not for her, but for you! Oh, and to remember who the ultimate authority is. That would be you, my friend, not your dispatcher. No one can compel you to drive in unsafe conditions, but if you do, and then you crash, there’s only one person doing the post-crash drug screen. Don’t be that guy!