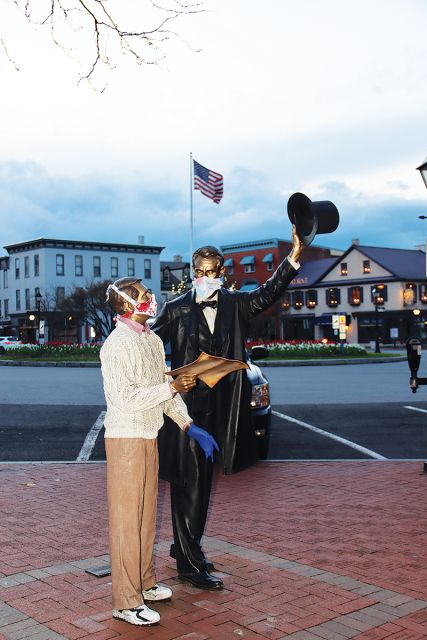 Standing just outside of the David Wills House on the square of Gettysburg, is a sculpture titled Return Visit. In this life-sized work of art, sculptor J. Seward Johnson, Jr. features Abraham Lincoln and a contemporary visitor to Gettysburg.  Lincoln gestures toward the Wills House, where he stayed the night before delivering the Gettysburg Address, on November 19, 1863.  The man standing with Lincoln holds a copy of Lincoln’s address, which clearly illustrates the contemporary relevance of Lincoln’s remarks.  In the spirit of public awareness and prudent actions in the nation’s present emergency, both Lincoln and the man standing with him are currently wearing masks.

On his 1863 visit to Gettysburg, Lincoln focused on those brave individuals who had engaged in the Battle of Gettysburg.  By most accounts his words that day, approximately 270 in all, stand out as one of the most memorable addresses ever delivered.  Its wisdom, it humanity, and its prudent counsel have long rendered it virtually timeless.  If Lincoln were to make a return visit to recognize those fighting on the front lines of the battles against the corona virus, undoubtedly, he would recognize the sacrifices made by those lost in this war.

Given such an opportunity Lincoln could well use the following passage from his Gettysburg Address.   The following passage would be as poignant, timely, and relevant as it was in 1863.  He would once again demonstrate his humility, he would recognize those who gave the last full measure of devotion, and he would passionately call on the nation to come together to continue the work they have begun.

The world will little note, nor long remember what we say here, but it can never forget what they did here. It is for us the living, rather, to be dedicated here to the unfinished work which they who fought here have thus far so nobly advanced. It is rather for us to be here dedicated to the great task remaining before us -- that from these honored dead we take increased devotion to that cause for which they gave the last full measure of devotion -- that we here highly resolve that these dead shall not have died in vain -- that this nation, under God, shall have a new birth of freedom -- and that government of the people, by the people, for the people, shall not perish from the earth.