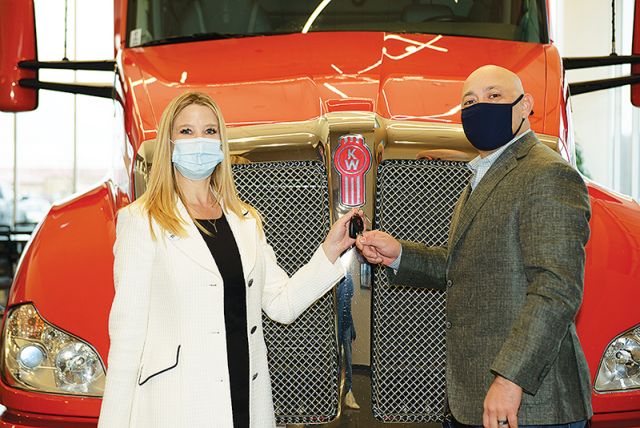 CHILLICOTHE, OH…  A distinguished veteran with 20 years in the U.S. Army received the annual “Transition Trucking: Driving for Excellence” award during a special ceremony hosted by the MHC Kenworth RoadReady Center in Chillicothe, Ohio.

For the fifth consecutive year, Kenworth teamed with the FASTPORT Trucking Track Mentoring Program and the U.S. Chamber of Commerce Foundation’s Hiring our Heroes Program to find America’s top rookie military veteran, who made the successful transition from active duty to driving for a commercial fleet.

Truck driver Ivan Hernandez of Werner Enterprises received the keys to a Kenworth T680, the top award in the recognition program. T680 features the complete PACCAR Powertrain with a PACCAR MX-13 engine, PACCAR 12-speed automated transmission, and PACCAR 40K tandem rear axles, and includes a 76-inch sleeper equipped with the Kenworth Driver’s Studio package of premium elements for a luxurious, relaxing and comfortable living environment. The T680 was produced by employees at the Kenworth Chillicothe plant.

Hernandez enlisted in the U.S. Army as an infantryman at the age of 20. Over the course of his military career, Hernandez deployed to Iraq and Afghanistan four times. In 2006, while serving in Iraq, Hernandez was wounded in action. For his heroism, Hernandez received two Bronze Star medals and a Purple Heart.

“I’m truly honored to receive this award from among an outstanding group of military veterans who served our country and have excelled in their new career as professional truck drivers,” Hernandez said. “I’m excited about the opportunities that this Kenworth T680 offers for me. Thanks to Werner Enterprises, Hiring our Heroes, FASTPORT and Kenworth for their support of this important program that encourages and supports veterans making the transition into the trucking industry.”

“We appreciate the service of Ivan Hernandez to this country and we wish him continued success in his trucking career. It was an honor to present Ivan with the keys to the Kenworth T680 on behalf of Kenworth and all our employees,” said Lisa Berreth, Kenworth marketing director.

"We are pleased to recognize Ivan Hernandez for his 20 years of military service and continued service to his community. We are grateful for Kenworth's ongoing commitment to veteran owner-operators in the industry as the T680 will greatly support Ivan's success,” said Eric Eversole, president of Hiring Our Heroes.

The four finalists were determined by tallying scores from a selection committee. The four advanced to an online vote on the Transition Trucking website (https://www.transitiontrucking.org/), where people could view a video of each driver and vote their choice for the top military rookie driver. Hernandez received the highest overall tally.

“Ivan Hernandez had an accomplished military career with a Purple Heart and Bronze Star. The discipline that Ivan learned during his time in the service has helped him achieve success in the trucking industry," said Brad Bentley, FASTPORT president. "Earning his CDL from Roadmasters, then completing a Registered Apprenticeship program at Werner allowed him to learn a new skill and continue serving our nation."

Drivers were nominated by trucking companies that have made a hiring commitment and pledge to hire veterans on www.truckingtrack.org, members of the National Association of Publicly Funded Truck Driving Schools, and Commercial Vehicle Training Association member schools.